The springs of Bregalnica River are located on the Malesh Mountains at 1200m a.s.l., close to the Macedonian-Bulgarian border, south of the mountain peak “Kalaica”. Ratevska Reka River, the most significant Bregalnica tributary, flows into Bregalnica south of the Municipality of Berovo. 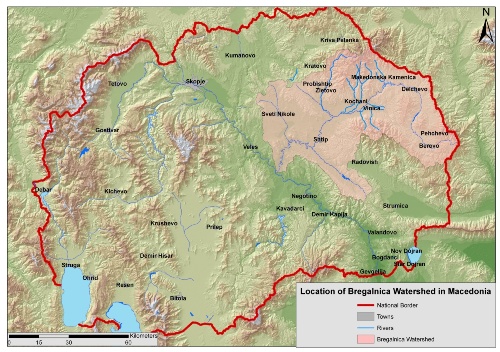 In its upper stream Bregalnica River deposits a large amount of coarse sediment onto the floodplains in the vicinity of Delchevo Municipality. Bregalnica River is characterized with high turbidity, which means it has a slow flow near the community of Istibanja.

Downstream of Kochani, Bregalnica River assumes the characteristics of a typical lowland river, meandering and depositing sediments on its shallow banks and floodplains. Following the confluence with Zletovica River, Bregalnica enters into a rather scenic, forest covered narrow gorges.

Passed the city of Shtip, Bregalnica carves deep into the paleogenic sediments, slowly converting the plain into a deeply furrowed canyon shortly before flowing into Vardar River near the village of Ubovo, located at 135 m a.s.l.

The total length of Bregalnica River is 211.5 km with an average descend of 5‰. Bregalnica River is divided into three distinct parts: (a) typical mountain turbulent flow from its springs to Istibanja; (b) slower moving part interspersed with shallow rapids up to Shtip; and (c) slow flowing typically lowland part from Shtip to its confluence with Vardar River.

The hydrography of the East Planning Region consists of a network of rivers, reservoirs and natural springs, including mineral and thermal waters. The most significant water resource is Bregalnica River feeding the Reservoir Kalimanci, the largest reservoir in the Eastern Region. This Reservoir, predominantly used for irrigating 28,000 ha of agricultural land in the Kochani- and Ovche Pole Valley, has a volume of 120 million m3, constituting 48% of the total annual mean flow volume of Bregalnica River. The river basin of Bregalnica River contains numerous other reservoirs, such as  Ratevo, Petrashevec, Loshana, Gradche, the reservoir in the village ofPishica, as well as several smaller reservoirs. The maximum flow of Bregalnica River is observedin April, whereas the minimum flow is observed in September.

Producing a total volume of 23 million m3 of water, the Zletovo Reservoir – Knezhevo Dam is of great importance to the target area as key supplier of potable water for several municipalities located in the lower part of the river basin, including the city of Shtip.

The Bregalnica River Basin is recognized for its numerous thermal springs located in the area ofVinica (Istibanja), Cheshinovo-Obleshevo (Banja) and the Shtip region (Kezhovica).