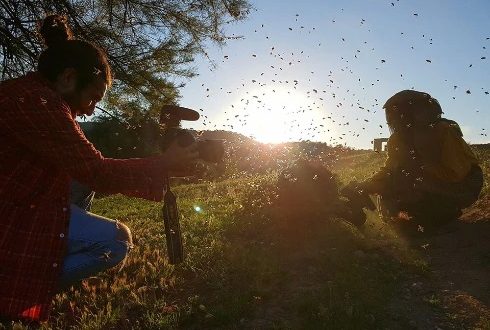 An inspirational story, breathtaking nature, lesson in sustainable development and a group of four young creative filmmakers… The idea for the Macedonian Oscar-nominated documentary film Honeyland was discovered through the Nature Conservation Programme in North Macedonia, supported by the Swiss Development and Cooperation Agency  (SDC).

Honeyland is already a well-known documentary, with more than 35 awards won at the most prestigious film festivals in the world and with two Oscar nominations: in the categories for Best Documentary Film and Best International Film. Today many people recognize the motto of Honeyland’s heroine Hatidze Muratova: “Take half of the honey and leave the other half to the bees. If someone breaks the rule, everyone pays the price”. However, many people are not aware that Hatidze, the last woman wild beekeeper in Europe, was discovered through the Nature Conservation Programme (NCP), a project by the Swiss Development and Cooperation Agency (SDC). How did everything start?

For the past eight years Switzerland has supported the implementation of the Nature Conservation Programme in North Macedonia, with the aim of supporting the country in the conservation of its natural ecosystems and exceptional biodiversity through the promotion of their sustainable use and management. The programme’s target area is the Bregalnica region. In the first three years of the project more than 30 experts were hired to conduct research in the region’s biodiversity. The results have shown that the Bregalnica region is of huge importance for the geomorphology and biodiversity because of the fossil riverbed and the meanders of Bregalnica River and the presence of various species of flora and fauna, and habitats. What is even more interesting, during their field visits the experts met Hatidze and discovered her unique style of beekeeping and honey production.

In order to promote the important findings of the research, NCP hired a group of young local directors to produce a series of short promotional videos to raise awareness about the unique biodiversity of the region, one of which was focused on sustainable practices in beekeeping. However, when the film crew met Hatidze for the first time, the idea for the short video evolved into something more. In the beginning, as the directors explained, they thought that the way Hatidze cared for the bees is some sort of tradition or ceremony. After they understood the idea behind “take half and leave the other half”, the documentary was born.

“The film is multilayered; it showcases life as it is. It contains birth, life and death. The main message is that there should be fair division, i.e. use of natural resources. This is in fact Hatidze’s principle in beekeeping”, says director Ljubomir Stefanov.

NCP and SDC recognized that Hatidze’s story is a powerful way to raise public awareness about nature conservation and sustainable use of resources. The Film Agency of North Macedonia supported the post-production of the documentary.

The team behind the documentary comprises four young people who worked together on putting Honeyland together: directors Ljubomir Stefanov and Tamara Kotevska, and cinematographers Fejmi Daut and Samir Ljuma, who produced around 400 hours of filmed material for the documentary. They followed Hatidze for three years and learned a lot about her simple rule of sustainability and responsibility for others.

“In hindsight, I cannot say that a single step on this long road could be called ‘easy’. Living and working for three years in almost unbearable living conditions, in a village without roads, electricity, running water or available food, stung by bees and flees at +40 C or exposed to ice and cold at -20 C… Then later, we spent more than 10 hours a day in the editing room for more than a year. The reason for making this film was questioned many times, but in the end, we cannot be prouder with the end result”, said director Tamara Kotevska.

In the years to come, through the Nature Conservation Programme, Switzerland will continue to support the Republic of North Macedonia in conservation of the extraordinary biodiversity and natural ecosystems, through promotion of their sustainable use and management.