American media, including New York Times and Los Angeles Times have published excellent reviews about the documentary film Honeyland. The Macedonian Sundance winner, represented by the US company for film production and distribution Neon is being screened in US cinemas since 26 July, has vowed the critics.

The documentary received positive reviews in The New Yorker, Vanity Fair, Rolling Stone, The Atlantic, FilmАVclub.сом, Тhe Кnockturnal, Shockya… The film was also reviewed by Nonfiction Film, The Popbreak, Vox, Indiewire and Deadline. In his article entitled The Sting and the Sweetness The New York Times critic A. O. Scott writes: “A documentary about Macedonian beekeeper’s conflict with her neighbors becomes a lyrical environmental fable.

He underlines that the opening minutes of Honeyland are astonishing, sublime, strange and full of human and natural beauty – as in a movie. A. O. Scott writes about the story of modest Hatdize, whose harmony with nature is disturbed with the arrival of Hussein’s nomadic family in her neighbourhood. 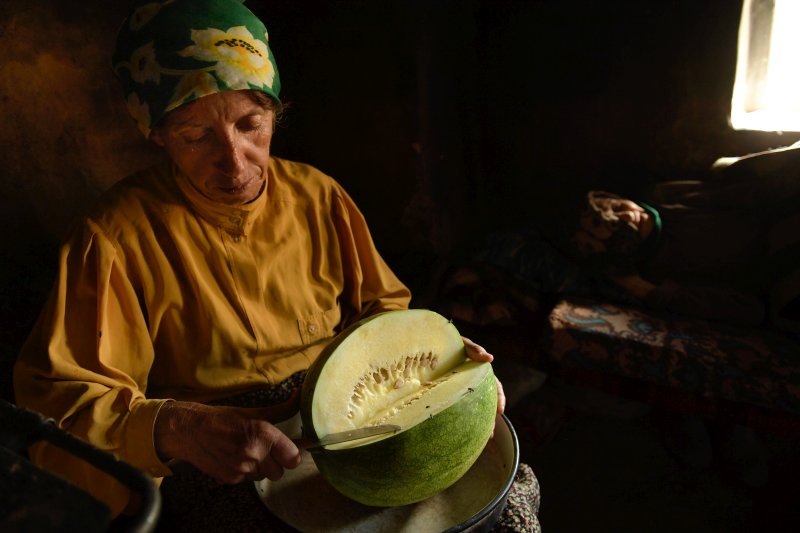 But the presence of Hussein and his unruly household is also serendipitous, a gift from the gods of film narrative. This isn’t to attribute the filmmakers’ remarkable achievement to luck. They draw comedy and pathos out of the conflict. They render the thick complexity of experience with poignant clarity. Their movie is quiet, intimate and intense, but touched with a breath of epic grandeur. It’s a poem including history.

And one that regards the future with both apprehension and hope. Hatidze seems to be the last of her kind. Hussein’s rapacious exploitation of scarce and fragile resources represents the norm, supported by a crude utilitarian argument. Their struggle feels like a microcosm of the human predicament at a time of environmental catastrophe, and Hatidze, precisely because of her modesty and patience, looks like a heroic figure, offering a warning and an example to the rest of us, her wasteful, wanton neighbors.

He continues: “It may be a strange thing to say about a documentary, but “Honeyland” reminded me of “The Lorax,” Dr. Seuss’s great, prescient tale of ecological folly. Like the title character in that story, Hatidze is a kind of prophet. She speaks for the bees.”

In the Los Angeles Times review entitled ‘Honeyland’ is a heartbreaking documentary about a vanishing way of life”, film critic Justin Chang writes that the opening scenes of “Honeyland,” a captivating and, finally, devastating documentary from the directors Tamara Kotevska and Ljubomir Stefanov, are wondrous to behold.

With practiced expertise, a middle-aged beekeeper named Hatidze makes her way along a rocky cliff and pulls aside a few stones to reveal row after precious row of golden honeycomb, shimmering like treasure buried in the mountainside. A scene that also takes on the stirring quality of an ancient folk tale or myth…Hatidze earns just enough for her to take care of her 85-year-old mother, Nazife, who is blind and bedridden. The scenes of them together in their small hut, shot with extraordinary candlelit intimacy, speak movingly to their mutual devotion as well as their resourcefulness. They are accustomed to making the most of very little.

That philosophy extends to the way Hatidze treats her bees, whose survival is closely tied to her own. “Take half, leave half” is an instruction she repeatedly mutters as she carefully removes what she needs (and nothing more), until the words begin to sound like an incantation. “Honeyland,” which won three awards at this year’s Sundance Film Festival, is first and foremost a graceful evocation of interspecies coexistence, of lives lived in delicate balance with the natural world. But it also becomes something more: a harrowing portrait of how quickly and easily that balance can fall apart.

The critic points out that “the movie doesn’t demonize Hussein for his clumsy inexperience or his eagerness to make a quick buck; the desperation of his family’s circumstances is plain enough to see.”

But if “Honeyland” refuses the convenience of easy villainy, it is no great leap to see Hatidze as quietly heroic. Whether trudging through snow or climbing back up that mountainside at film’s end, she is a principled and compassionate custodian, one of the last of a dying breed. This lovely, heartrending movie leaves you marveling at her history and thinking anxiously for her future — and wondering, perhaps, why her example of basic decency has become so endangered”, Chang writes.

On Rotten Tomatoes – the leading online film and TV review-aggregation site, considered one of the most relevant resources for film recommendations – Honeyland has 100 percent positive comments.

From 26 July the documentary is distributed to select cinemas in the US, including Laemmle Royal in Los Angeles and Quad Cinema in New York.

In late August it will be screened for domestic audiences at the largest documentary film festival here, “Makedox”, after which it will be included on the regular repertory in Skopje cinemas.

The documentary, produced by Apollo Media and Trice Films, was made as part of the Nature Conservation Programme in NorthMacedonia – a project of the Swiss Development and Cooperation Agency (SDC), coordinated by Farmahem and supported by the Film Agency of the Republic of North Macedonia.