The area of Probistip is of particular geotourism value in the Bregalnica River basin. The town itself is home to a unique collection of minerals that would soon get a new, representative space. Near the town there are a dozen volcanic cones, while only 3 km away is the Lesnovo crater, one of the best preserved and most interesting in the Balkans.

The Lesnovo crater is located in the western section of the Osogovo Mountains, between Probistip and the village of Zletovo. It is one of the best preserved fossil volcano craters in the Republic of Macedonia and the Balkan Peninsula. The crater’s diameter is around 1.5 km, with a depth of 150-200 m. Around the crater’s centre there is a ring of 7-8 cones, or more precisely volcanic necks (plugs). The most impressive is the northern hill of Ilin Krst (1127 m), which was most probably the main volcanic centre with the greatest quantity of lava and volcanic materials.

Through the crater’s middle part, in a northeast-southwest direction, flows the small Lesnovo River, which cuts through the crater’s western frame. At the point of intersection, the valley of this creek is very interesting, steep and with various holes (caves) on the sides. The hollows and holes in the rocks are not natural, but are a result of people digging the good, firm volcanic rocks (andesite) for making millstones. Namely, the surrounding villages, in particular Lesnovo, were known for the production of good-quality millstones that were in high demand. The volcanic activity in this area began around 30-35 million years ago. The volcano had strong, explosive eruptions, which ejected large quantities of ash, gases and thick lava. That is why there are traces of lava flows and volcanic bombs. 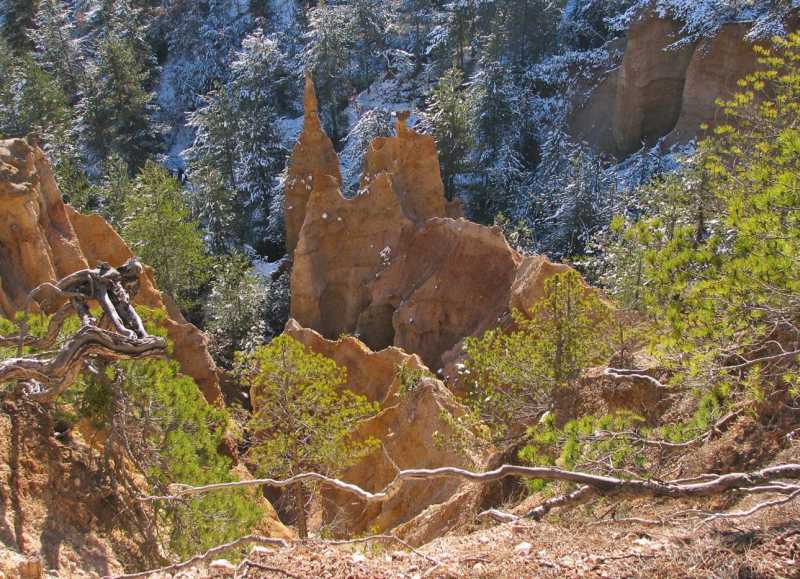 This can give us insight into the tumultuous geological history of this area in the last 30 million years. Five km south of Probistip, by the road towards the village of Zletovo, there are volcanic balls or volcanic bombs, some of which are perfectly round, with similar occurrences near the village of Dobrevo too. Near the village of Zletovo is the entrance to possibly the most beautiful gorge in the EPR, the Zletovo Gorge, whose steepest and most fascinating part (by the village of Kojkovo) is 10 km long. Even walking only on the good asphalt road tourists can enjoy the wild nature, the steep, almost canyon-like cliffs, several waterfalls, gorgeous vistas on the remains of former volcanos, and so on.

East of the village of Zletovo there is another great geo-site, Ratkova Skala, which looks like huge, intimidating rocks made of quartzite. The most interesting geotourist sites near Stip are Isar and the small pass of Bregalnica, then the Radnjanska River valley, which has an almost alien-like appearance, the small, but interesting canyon of Kamnik, which extends from the valley, as well as the caves below the peak of Turtel.

You can read the first part of the blog post here: Geotourism (part 1)