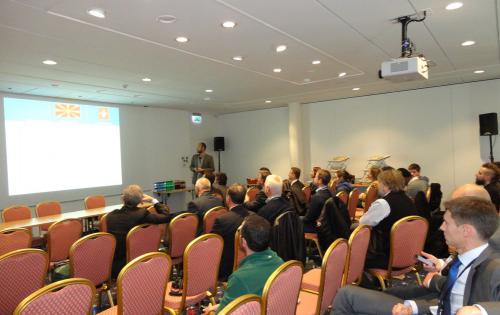 More than 200 participants – representatives of official state delegations – attended the “European Forest Week” which took place from 2 to 6 November 2015 in Engelberg. This biennial event has been organised for the third time by the United Nations Economic Commission for Europe (UNECE) and the Food and Agriculture Organisation (FAO) of the United Nations. As part of the programme, a separate event was organised for promotion of the NCP in Macedonia, as well as promotion of the cooperation between the Faculty of Forestry from Skopje and the School of Agricultural, Forest and Food Sciences within the Bern University of Applied Sciences.

During the event, presentations were given by a representative of Farmahem, as coordinator of the NCP in Macedonia, professors from the two scientific institutions and a representative of the Swiss Agency for Development and Cooperation. Also the latest video of the NCP titled “Towards Sustainable Forest Management” was presented. The video is available on the following link:https://www.youtube.com/watch?v=Lx3R7VipIYw

Representatives of the Faculty of Forestry of Ss Cyril and Methodius University from Skopje paid a visit to the School of Agricultural, Forest and Food Sciences of the Bern University of Applied Sciences, and Professor Jane Acevski from the Faculty of Forestry held a lecture on Forest Communities in the Republic of Macedonia and at the same time he familiarised the students of this University with the biodiversity of the Republic of Macedonia.