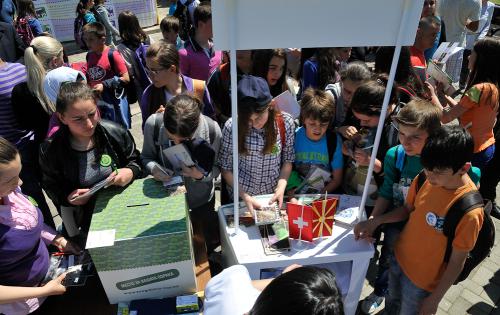 The main national event for celebration of 22 May, International day for Biodiversity this year was held in East part of Macedonia – in Delcevo, organized by Nature Conservation Programme in Macedonia, project “Support to Republic of Macedonia for revision of national strategy for biodiversity with action plan” and Ministry for Environment and Physical Planning in cooperation with Municipality of Delcevo, Projects for Bregalnica river Basin Management Plan and Education for nature conservation in Bregalnica Region Macedonian and Center for Development of East Planning Region. At the beginning of the event Director of Direction for Environment, Ambassador of Switzerland in Macedonia and Mayor of Delcevo addressed participant at the event. His Excellency Ambassador Lazzarotto pointed out the importance of Macedonia, especially Bregalnica region for biodiversity in Europe and in this perspective support that is given to this region by the Swiss Confederation with holistic approach providing investment in integrated water management, nature conservation and education for nature protection in order to enable sustainable development of the region. According to the Director Mr Trajkovski establishing efficient law system and strategic framework for protection and sustainable use of biological diversity is clearly defined goal for Republic of Macedonia. Mayor of Delcevo Mr.Sehtanski expressed gratitude for support by Swiss Confederation to Bregalnica Region and stressed the importance of public awareness in conservation of biological diversity that  abounds Bregalnica region.

The maing goal of the event was to draw attention of general public to importance of biodiversity for the whole quality of life and to contribute towards awareness raising for nature conservation especially among youth population. Students of municipal schools  “Vanco Prke” and “St.Kliment Ohridski” showed their creativity for nature protection trough interactive eco games, drawings and experiments. All participates at the event were interested to see the exhibition of the most successful photos of competition on topic “Biodiversity in Bregalnica Region”, that was announced by the Nature Conservation Programme in Macedonia. Authors of the best three photos were awarded by the organizer and the prizes were handed by Ambassador of Switzerland and National team leader of NCP.

All partner organizations involved in realization of the event have had stands, presenting the goals of the programms and realized activities. Special boards and totems were prepared by organizers with  information about biodiversity Aichi targets, Biodiversity decade 2011-2020 pronounced by UN, as well as about national biodiversity vision, goals and priorities for nature conservation and education about important species of plants, fungi and animals in Macedonia.

Participants at the event, especially primary school students showed great interest in giving their own suggestions how to preserve nature. They wrote massages on NCP stand on special carts reflecting biodiversity of Bregalnica region, designed and printed by NCP especially for this occasion.

Second part of the event was focused on representatives of municipalities, schools, public institutions and NGOs. In Culture Centre in Delcevo in front of more than 100 participants, Nature Conservation Programme and project “Support to Republic of Macedonia for revision of national strategy for biodiversity with action plan” were presented. Participants have had possibility to learn more about Regional biodiversity and Island biodiversity tough lectures prepared by national experts in cooperation with Macedonian Ecological Society.